When we were visiting Warsaw a week ago, I had no idea we were just missing Barak Obama’s arrival. After five days there, spent delving more deeply into the history of Poland in general and Warsaw in particular, I appreciate the President’s confirmation of the resolve of the US and NATO to defend, if necessary, Poland and the other former Soviet satellite states which are, indeed, now members of NATO. For the Ukraine crisis has certainly given the countries at our eastern outposts a mighty case of the jitters. And for good reason: Promises are one thing, carrying through can be quite another.

Warsaw is a city resurrected – by its own strength and resolve – from the ashes of World War II. Although under Soviet dictatorship, the citizens immediately started to rebuild their city, not a modern incarnation of it, but as it had been, as they had loved it before 1939. 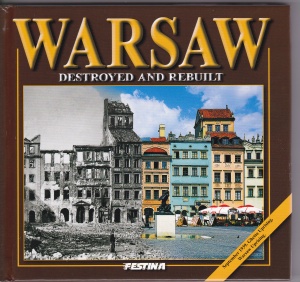 After a visit to the Warsaw Rising Museum, which presented blow-by-blow the city’s last-ditch struggle to survive, I came away realizing that it wasn’t just the Germans and the Russians who raped Poland. In September 1939 when the country was invaded first from the west by the Germans and then from the east by the Russians, Poland’s allies – Great Britain and France – did not lift a finger. They were powerless; they could only let the invaders have their way.

With its low plains, Poland had always been an easy target for armies to march across. Napoleon certainly took advantage of that. And its geopolitical location between three greedy empires (Austro-Hungary, Russia and Germany) made it a tempting target. Thus in 1795 Poland became the tragic victim of its geography and topography. It was divided into pieces, like a cake, between Austria, Germany and Russia. Only at the end of the First World War did it reappear on the map as a sovereign nation.

In 1939 the German National Socialist regime was determined, once and for all, to quash Polish identity. One element of that was leveling Warsaw. In their perception, that would destroy their national identity. By 1945, 90% of Warsaw had been bombed and burned out. But they underestimated the will of the people to stay Polish, as evidenced by their final uprising in the summer of 1944. They went down but they went down fighting.

Aerial view of a city devastated

During the war, the Polish government was in exile in London; Polish troops fought side-by-side with the British, French, Americans, Canadians and others. What remained of their airforce flew with the RAF. They fought bravely and believed when the war was won that they would get their country back.

At Yalta, a seaside town in then (and now once again!) Russian Crimea, in February 1945, Roosevelt, Churchill and Stalin set the framework for the post-war political landscape of Europe. Poland was already occupied by Russia. The western allies, again, did not have enough strength to counter Stalin’s drive to secure his sphere of influence. Poland was left to Stalin. The rest is, obviously, history. My conclusion: Poland was f***ked, repeatedly, not only by her enemies but also by those she thought her friends.

Let’s hope and pray that the USA, within the scope of the NATO alliance, does in fact, this time, defend Poland and the other former Iron Curtain countries from Vladimir Putin’s latest version of Russian egomania and paranoia, should this become necessary. The rest of western Europe must move on from its tentative measures and show more backbone. For with one eye on 20th century history, it is easy to understand the nervous twitch from which Poland and her eastern neighbors are lately suffering.

"John, don't just do something—stand there!"